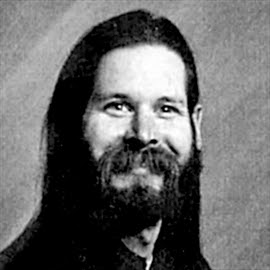 BENTLEY, James William "Caz" August 30, 1960 - October 25, 2015 Passed away on Sunday, October 25, 2015 at the age of 55. Loving father of Samuel Liam Bentley. Predeceased by his mother, Phyllis (nee McLeod). James is survived by his father, William Elderkin Bentley, his brother Wilfred, a sister Susan (Charles) and nieces Carrie, Anne, Katy, Victoria and Carol, and his nephew, Charles. James earned the nickname "Caz" while serving in the Naval Reserve. It was short for "Casual" and referred to his deportment. James graduated from Waterloo University with a degree in University of Waterloo, Honours Bachelor of Arts, Fine and Studio Arts and from The University of Western Ontario (B.Ed.). He spent many years doing sculpture, stained glass, pottery and printed Celtic art. He taught for the Waterloo District School Board in several schools most recently K.C.I. "Caz's" work in several media included printmaking, stained glass (traditional and Tiffany method), painting, drawing and sculpture in wood, clay, stone and most recently, pottery. One of his most beautiful works - the stained glass windows he designed and created for the chapel at St. Jerome's University in Waterloo. He has also been an artisan at The Goderich Celtic Festival since 1999. He has left behind a legacy of students, who through his teaching, were encouraged, inspired, and enlightened. The family of James Bentley will receive relatives and friends on Friday, October 30, 2015 from 3-5 p.m. and 7-9 p.m. and on Saturday, October 31, 2015 from 2-2:45 p.m. at the Henry Walser Funeral Home , 507 Frederick Street, Kitchener 519-749-8467. A memorial service will take place in the chapel of the funeral home at 3 p.m. on Saturday followed by a reception. Cremation has taken place. As expressions of sympathy donations to the Arts Access Fund, would be appreciated by the family (cards available at the funeral home). Visit www.henrywalser.com for the James (Caz) Bentley memorial.