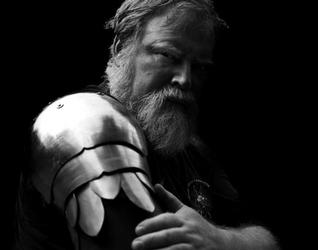 Swordfighter, medieval armourer, airman, mentor and teacher. Died as he lived life, faithful and steadfast to all that is best in the chivalric ideal, worshipped God, defended his country, protected the weak, encouraged the faltering and honoured his wife, Brenda. (Brewer). Peacefully at Elisabeth Bruyere, on Oct. 8th, 2014 aged 58 after a short but determined battle with cancer. Son of the late Andrew Fedun and Joyce Lundeen. Brother of David, brother in law of Bill Brewer of B.C. Bill was an RCAF veteran, teacher of chivalrous swordhandling at Algonquin College and Plant Recreation Centre, co founder of the Armoured Company of the Sword. He was self taught in the art of medieval armour and generously gave of his skill and knowledge to many others. He believed in and lived by the virtues of Chivalry: Honour, Courtesy, Loyalty, Generosity, Prowess, Wisdom and Noblesse Oblige. Thanks to the staff at Elisabeth Bruyere and the Ottawa Cancer Centre at the General Campus and particularly Drs. Jonker and Sud and social worker, Krisann Dennis. Memorial Mass on Wednesday, October 15th, St. Catherine of Siena Church, Metcalfe at 11 am. A celebration of life to be held on Sunday, November 2nd at Russell House Pub from 4-8 pm. If desired memorial donations made to the Ottawa Regional Cancer Foundation would be appreciated.

Email ThisBlogThis!Share to TwitterShare to FacebookShare to Pinterest
Labels: memoriam