Awards and Precedence
Posted by Todd H. C. Fischer at 03:37 No comments:

War of the Trillium 2020: The Plague Year

Imagine (A history of War of the Trillium in song)

Imagine
written for Ealdormere's virtual War of the Trillium
music and lyrics by Richard Schweitzer (aka Martin Bildner)
Posted by Todd H. C. Fischer at 13:05 No comments:

Coronation in a Time of Plague

Today, April 25, 2020, was the Coronation of Their Majesties Rattanicus and Isabelle. Due to the Covid-19 pandemic, the actual event had to be cancelled. Instead, via a group Zoom chat with over 100 attendees, TRMs Kaylah and Trumbrand ceremonially removed the Crowns of the Queen and King of Ealdormere, and Rattanicus and Isabelle became the monarchs of the lupine realm. A variance was granted to extend Their reign by at least three months, with the expectation that they would have a Coronation then. Feeling that pledges of fealty should be made in person, they instead presented the following statement (scribed by Their Lawspeaker, Mistress Nicolaa de Bracton) which all who were watching could recite if so moved:

I here pledge unity and support
To the kingdom of Ealdormere
To uphold each other in dark days
And honour the laws and traditions
Giving hands and heart
To the health of the Kingdom
To ever follow the banner
And howl with the Wolf
I stand with Ealdormere
Apart, yet together in spirit
Until the day comes we can embrace again
Thus say I, (name).
Posted by Todd H. C. Fischer at 17:49 No comments:

In a time that will become a focus of study for future historians, Covid-19 began spreading across the globe in late 2019. In the spring of 2020 it reached North America, causing a state of emergency across the continent. In an effort to slow the spread of the virus, large gatherings were cancelled and people put themselves into self isolation. This isolation was difficult to deal with, for many reasons, but perhaps greatest among them was the feeling of being alone. Many people could only leave their home to get groceries. Businesses closed their doors, parks were shut down, sporting events cancelled. People missed out on anniversaries, weddings, birthdays, and other important events in an effort to protect the most vulnerable among us, and to decrease the overwhelming demand this outbreak made on our already over burdened and underfunded health care systems.

Plagues have swept the earth before, but thanks to the internet and modern technology, though we could not meet with friends and loved ones in person, we were able to connect online. People recreated famous paintings and posted them online. Museums, galleries and conservatories offered free virtual tours. People from all walks of life (from everyday Jane and Joe to famous celebrities) recorded themselves reading, singing, and dancing.

In a show of comradery and community members of the SCA began to make videos of themselves dancing to popular music. Here then is the collaborative effort of the citizens of the Kingdom of Ealdormere, showing their resolve, their connection and their joy during a turbulent time. [Edited by Baron Alistair Kirk / Jordan Heron and posted to Vimeo on April 22, 2020.
Below is a low resolution version of the file. For the original go here.] 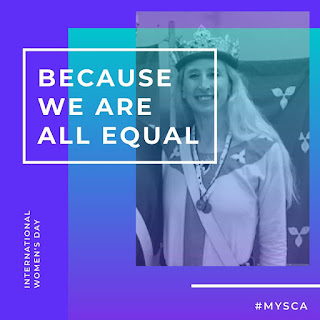 Happy International Women’s Day! Today we’ll be celebrating just a few of the countless amazing women in the SCA.

On Saturday 21 September 2019 Ealdormere Coronation took place. Queen Kaylah the Cheerful became only the second Woman in the SCA to rule as Crown by right of arms. 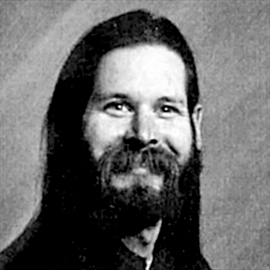 BENTLEY, James William "Caz" August 30, 1960 - October 25, 2015 Passed away on Sunday, October 25, 2015 at the age of 55. Loving father of Samuel Liam Bentley. Predeceased by his mother, Phyllis (nee McLeod). James is survived by his father, William Elderkin Bentley, his brother Wilfred, a sister Susan (Charles) and nieces Carrie, Anne, Katy, Victoria and Carol, and his nephew, Charles. James earned the nickname "Caz" while serving in the Naval Reserve. It was short for "Casual" and referred to his deportment. James graduated from Waterloo University with a degree in University of Waterloo, Honours Bachelor of Arts, Fine and Studio Arts and from The University of Western Ontario (B.Ed.). He spent many years doing sculpture, stained glass, pottery and printed Celtic art. He taught for the Waterloo District School Board in several schools most recently K.C.I. "Caz's" work in several media included printmaking, stained glass (traditional and Tiffany method), painting, drawing and sculpture in wood, clay, stone and most recently, pottery. One of his most beautiful works - the stained glass windows he designed and created for the chapel at St. Jerome's University in Waterloo. He has also been an artisan at The Goderich Celtic Festival since 1999. He has left behind a legacy of students, who through his teaching, were encouraged, inspired, and enlightened. The family of James Bentley will receive relatives and friends on Friday, October 30, 2015 from 3-5 p.m. and 7-9 p.m. and on Saturday, October 31, 2015 from 2-2:45 p.m. at the Henry Walser Funeral Home , 507 Frederick Street, Kitchener 519-749-8467. A memorial service will take place in the chapel of the funeral home at 3 p.m. on Saturday followed by a reception. Cremation has taken place. As expressions of sympathy donations to the Arts Access Fund, would be appreciated by the family (cards available at the funeral home). Visit www.henrywalser.com for the James (Caz) Bentley memorial.

This website is not an official site of the Society for Creative Anachronism. It is maintained by Maister Colyne Stewart, OP (mka Todd Fischer) (he/him). The original authors retain the copyright to their works. Please respect the legal rights of our contributors. All efforts have been made to contact authors for their permission to include their work on this site. If any of your work is included here, and you want it removed, contact the Chief Historian. If you have any articles, event reports or histories to submit, contact the Chief Historian.