The Making of a Master 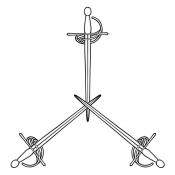 It isn't every day that one witnesses the creation of a new Peerage Order.  In fact, it's safe to say that with the possible exception of Duke Finnvarr, there was no one in attendance at Practicum who had ever seen such a thing.

THL Giovanni d'Enzinas was put on vigil for the Order of Defence at Queen's Prize Tourney.  For those who were not in attendance, the initial boon was begged between Their Majesties, as there was not yet a Master of Defence within Ealdormere.  At Practicum, however, Master Giovanni of Trimaris -- or "Master Giovanni the Elder", as he was introduced--did this function at the vigil ceremony at Practicum, held in a short morning court.  Rather than just the Order of Defence, Their Majesties then asked all the Peers there present to bear witness and to lend their support to the boon. Laurels, Knights, Pelicans, and Royal Peers all stepped forward to do so.

The vigil ceremony then commenced.  Seven speakers, representing the seven virtues, each came forward with an item to wear or contemplate during the vigil.  These items were:

The seventh item would come during the vigil--the words of those there present.  Giovanni then spent the rest of the day, alternating between contemplation and combat in a list set up for this process. Each visitor was gifted with a quill pen--as Giovanni explained, the pen is mightier than the sword.   The rapier combatants there present also availed themselves of the available lists to enjoy a little friendly combat.

The ceremony itself saw the creation of new traditions of regalia, as well as following the basic format of other Ealdormerian ceremonies. Once again, Master Giovanni (the Elder) restated the boon, and all the Peers there present were called forward to bear witness. Giovanni then processed in behind the members of his household, garbed in a stunning leather doublet and pluderhose (made by Dame Helen of Greyfells).  Five spoke in support of Giovanni:  First, Duke Finnvarr de Taahe as a Knight, followed by Master Aaron Harper as a Laurel (who also brought the words of Master Illadore, the Premier member of the Order of Defense of the West Kingdom), followed by the words of Mistress Kersteken Janztochtere as a Pelican (as she was ill, her words were read by Duchess Jocea), followed by Countess Arlette as a Royal Peer, and finally by Baroness Lucia as Giovanni's lady.

Next, Giovanni was asked: " Shall you give your solemn word to all gathered here, to uphold the deals of the Kingdom of Ealdormere, to act with nobility and offer every courtesy possible, to share your skill and knowledge on and off the field with students or armigers, to bring iron-point to bear when needed, and defend the honour of the Crown by blade and word? Will you promise to ever be strong and set yourself aright?", to which he answered "Aye."

The second was a knotted cord, representing strength and the path both behind him and ahead, as well as his obligations and binding himself to his craft and ideals. This was presented by Ernst Brock, Hauptman of Ottawa Swordplay, with the kind permission of Their Majesties.


The third was the collar of the Order. This beautiful collar of estate, wrought by Mistress AElfwyn aet Langanwuda, features the badge of the Order in the centre, wolves representing Ealdormere, and seven trilliums representing the seven virtues. Borujin Acilaldai, a Master of Defense of the East, presented the collar.This collar will also be passed on to each new member.  He was also invested with a pair of white silk tablet-woven garters, The intent is these two garters will then be passed on, one each, to the next two MoDs as a symbol of fellowship, with the hope that these items as well are passed on through the lineage as the Order grows.

The new Master Giovanni then swore his oath of fealty:
I here swear fealty,
To the Crown of Ealdormere
On my honour I vow
To keep a noble and kind heart
To uphold integrity and skill
Be ever generous in mercy and knowledge
Defending the honour of the Crown
And all we hold dear
I pledge my blade and heart,
Thus swear I.

While the new Master greeted his Peers, the scroll, based on a privilege of Frederick III concerning a German sword brotherhood, was read into court.  The scroll was a gorgeous work of art with exquisite calligraphy and goldwork by Mistress AElfwyn Hatheort.

Ealdormere now has beautiful regalia for the new Order to pass on to each member, as well as a ceremony created by Master Brand (to whom I am grateful for passing on the details to confirm my memories of the day).